Advice for Addressing Evil From the Renaissance Man 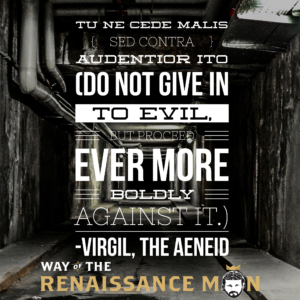 Tu ne cede malis sed contra audentior ito
(Do not give in to evil, but proceed ever more boldly against it.)
— Virgil, The Aeneid
The above Latin verse from Virgil’s Aeneid was adopted as a motto by one of the greatest thinkers in history, Austrian School economist Ludwig von Mises. The author of the highly recommended book Human Action recalled these words during the dark hours of World War II, and it helped him survive intellectually as he was forced into political exile by Nazi sympathizers. I think we all can learn from the example set by Mises, as the only real power that evil has is the power we choose to give it. Thanks, Mises, for being a true intellectual and moral hero.

Wisdom about money, investing and life can be found anywhere. If you have a good quote you’d like me to share with your fellow Renaissance Man readers, send it to me, along with any comments, questions and suggestions you have about my website, newsletters, podcast or anything else.

In The Name Of The Best Within Us,

Now, we want to hear from you! Would like to share your opinion or make a comment on the Way of the Renaissance Man podcast? If so, then please leave your comment or questions in the space provided below and share this article with your friends and family on Facebook, Instagram and Twitter. Your comments or question could be chosen as our featured
Ask the Renaissance Man Anything on a future episode.